Sorry the blog on the LA Vegan Beerfest took a few days to come out. Let’s just say it was a rough weekend of recouping. Remember when we were 22 and could go out til 4am come home sleep 2 hours get up shower and go to work then roll it all again the following night. Yah well at 42 you go to a 5 hour beerfest on Saturday and an ABC wrap party (open bar) Sunday and you aren’t ready to sit down and write about drinking for at least three days. So I apologize. Here we go….

On Saturday May 4th I attended the LOS ANGELES VEGAN BEERFEST brought to you by Tony Darts Away, Quarry Girl and The Roxy in Hollywood, CA tickets were $40 for all the beer samples you like from 1-6pm. Also included were bands and food trucks (food was at an added cost). If you wanted to go in an hour early at noon VIP tix were on sale for $50 and they also had a VIP seating area. I went with my friends Tricia and John, (they have done prior beer fests with me and Johns a Vegan so we blended).

First let me point out that the Vegan part of this mostly was the food. YES there were Vegan beers there and yes they were served, but some there were not…the Vegan part was mostly the food. I point this out as I have had several people ask me the question “Aren’t all beers Vegan?” You would think. No dairy, no meat, BUT some beers do use gelatin for color, and some even use fish bladders. Isinglass is used as to stabilize the foam or head and clarify beer. It comes from the bladders of fish that are harvested for food. Collagen is the active ingredient that is gained from the bladders. This is more common in European beers than American brews (Guiness uses isinglass)

I thought the booths were super aware of their audience. At the Crispin Cider booth one of the ciders they were sampling was a Honey apple and they were quick to point out that there was honey in it and asked if I was okay with that. Considering I had a giant tri tip steak sandwich before heading out to the fest I smiled and said “that’s fine, thank you for asking”.

They even had sidewalk chalk fun!

I should really begin with this Festival was awesome! So fun. So well done. So mellow. No one was rushing. No one was pushy. Just so fun. Just a giant thumbs up! And some of the nicest people ever were running this show. I can’t tell you how Twitter friendly they were. Whoever was running their social media was on it. Answering questions, tweeting, retweeting, just being so friendly, and dammit I loved these guys!

Ok back to the actual festival.. First it was smaller than the last fest I attended. About half as many breweries I think 40 were there, 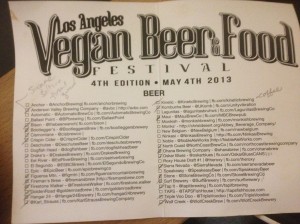 but literally no lines. For good or bad I think I drank from well over 24 with multiple tastes (wait til you hear how my day ended) I never ever waited for a beer. There were a lot of people but it wasn’t crowded it all.

The bands were a fantastic soundtrack for the day. All of them were amazing!

But I’m here to talk about the beers.

Many of these breweries I have tried. Many I love. Can’t deny I love Firestones Pils I found at the last fest and I’m a big fan of their Velvet Merlin Stout, but I have to say my big favorites of this fest included Golden Road’s Almond Milk Stout, Oskar Blues Mamas Little Yella Pils (Had that one on Mr Beermans birthday but its so clean I had to have a few at the fest), Surf Brewery’s Mondo’s Cream Ale, Kinetics Rusted Coffee, Fireman’s Brew Redhead and I can’t tell you how many samples I had of Crispin Ciders Bird on a Wire Lets talk about these finds.

Golden Road http://goldenroad.la is one of my favorite places in LA. Its really close to my house and as I have mentioned in previous blogs, their Pub is outstanding. So for this fest they created a Vegan Stout with Almond Milk.

SOOOOOOOOOOOOOOO yummy. It was about 5% give or take a point (forgive I really need to take better notes when Im drinking). And this was maybe the 3rd beer I tried and went back multiple times during my five hours to try it again.

Oskar Blues http://oskarblues.com just doesn’t let me down. Mamas Little Yella Pils is so good. I love this beer and my friend John was looking for a clean crisp golden beer.

This was it. I think he may have had samples of this one more than any of the other beers combined. If you want a good pilsner for outside drinking this summer. Get this one. 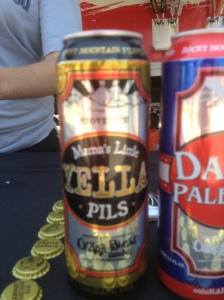 Surf Brewery – http://surfbrewery.com is one of my new favorite breweries! Out of Ventura, I really need to make it up there to their tasting room. Lately Mr Beerman and I have been enjoying their Mondo’s Cream Ale with our Sunday Grilling tradition. Its like a Boddingtons but I think lighter and less carbonated. I was eager to find them at the fest since we were drinking their bottles from Bev Mo. The draft version was even better. I also tried their ale, and their strawberry wheat (which ran out fast must have been a crowd pleaser). My favorite is still the Cream Ale, but I encourage you to grab a bottle if you see them in your store. Good stuff! 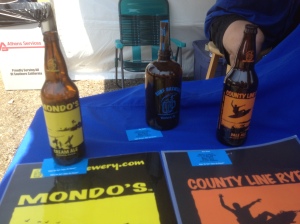 Kinetic http://kineticbrewing.com is a sneaky find. I almost am sad to mention that they told me they are not bottled yet. SO I think you need to find them in a local bar. Their Rusted Coffee was just that. It was SO coffee. But not in a dark stout, or even porter way. This was an amber in color lighter than expected beer that to your nose was 100% a pot of coffee. It was nuts. I loved it. Smelled like Coffeebean tasted like a delicious ale! Find it!

Fireman’s Brew Redhead http://firemansbrew.com Ok those who know me may think I like this beer just cause of its name (The Bierlady is one… a red head not a fireman, but Mr. Beerman is…, a fireman not a red head), but it was a good red ale. Its found in your local grocery store. Not particularly a craft beer. But it was a nice change toward the end of my day.

Okay so my last BIG find was Crispins – http://crispincider.com Bird on a Wire. 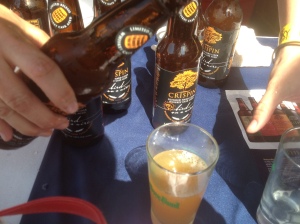 Its no secret that as of late I have become a cider person. When did that happen? Twenty years of drinking and I never had more than 3 ciders til this year. Now its my big find of a Beerfest. Well I can honestly say Tricia and I got our lil 4 oz glass filled up more than I can remember of this delicious, delicious, treat. http://www.crispincider.com/cider/products/barrel-aged/bird-on-a-wire/ This cider is blended right in whiskey barrels and at 6.9% its no apple juice. It has this aroma of apple with a slight smell of bourbon and although Tricia is a bourbon drinker I am not. SO don’t let that scare you. It was just the right balance. So far I have liked every cider Crispin does. And I put them heads and tails above Ace, Strongbow and any other Cider Ive tried. They even have a brochure online for Cider Cocktails. How fun is that! Try them all. But for sure try this one!

So at the end of the fest I wanted to do a breathalyzer. Just to see what those little sips add up to. Wreck Check http://www.wreckcheck.me was a group encouraging folks to try a breathalyzer and see how the beer was affecting them. 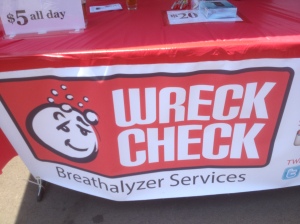 I spoke to them for a while. Suggesting things like Tony Darts Away who is a bar by my house in Burbank and one of the hosts of the festival maybe have a shuttle or bus running from the bar to the festival next year. Since so many fest go’ers were patrons of Tony’s I’m guessing we all lived in the same hood. Which was about a $45 cab ride. I was lucky enough to have Mr. Beerman drop me and I took the Festival suggested SideCAR ride home http://www.side.cr

Side car is a great idea. It’s a ride share program of sorts. Folks in LA looking to make money can apply and as long as they have a clean driving record, go through a background check, etc they can drive you home in their own cars. I was worried at first but SideCar has a GPS on the driver and you can send your location and GPS to say your loving husband waiting for you at home. I tried it! A nice man picked us up, dropped off Tricia and John then carted me back to Burbank. For less than a cost of a cab. You have a record of this person on your phone and can even request them for future rides.

And so we blew…When Tricia did it she clocked a .119. They wrote “Solid DUI” Now we weren’t driving so this was just for fun. So don’t panic. Now it was my turn. I wasn’t worried…I just drank beer, yes a few hours worth, but I was feeling tipsy at best. Not sick, not slurring, not walking funny, just feeling happy. I clocked .241 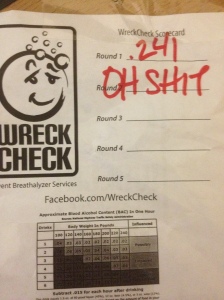 on a Festival breathalyzer. That’s triple the legal limit to drive. And I showed no real signs of being super drunk. Hmm…that says to me no matter what you drink. No matter how tiny your samples are. No matter how good you feel. Be careful. Be smart. Call a cab. Or if you are in LA call Uber. Use the SideCar App…you have choices.

Overall I have to HIGHLY recommend this Festival to anyone who loves beer. And if you are Vegan or like great bands BONUS. It really was a great day.
See you all at the 5th Annual!!