What is a growler? Ask my kids and they will bring up their stomach before dinner, but nope, a growler is simply a glass jug that carries a half-gallon of beer.

Pretty much any brewery and some pubs distribute these. Its kinda like Beer Take Out! I love the growler. There comes a time of the year when Mr. Beerman and I have our Keg-fridge on hold. I know WHAT? You say? Why? Why not have draft at home 24/7, 365. Well here’s the thing from April thru September we go through 1 to maybe even 3 kegs due to BBQs, Holidays, Birthdays, and well just the heat of summer. But come fall, I guess we get all respectable and don’t drink as much. No that can’t be it…maybe we are just visiting more pubs then drinking in our backyard. SO for these months, the keg is dry and we turn to the Growler.

Where did the name growler come from? Well according to the interweb there are several theories. I kinda like this one. In the early ish 1900s, beer was carried from the local pub back to folks homes in a pail. They say when the beer moved around all over the pail, it created a growling like sound because the CO2 was escaping. And so it was called “growler”. Not sure if that one is true but I like the image of drunks dudes heading home after a night of drinking trying to keep beer from sloshing out of their pails.

Growlers are fantastic. You can take home draft and enjoy it just like you were at the bar or brewery. And really once you purchase a growler, refills are HIGHLY economical. For example, at a recent visit to Eagle Rock Brewery http://eaglerockbrewery.com/ we saw that their Growlers are $20 for a new 67 oz and just $12 to refill it.

Want me to do that math? Well a pint of beer is 16oz. I had to look that up by the way, cause I was educated in the late 70s when the US wanted to go metric then decided mid stream it was a bad idea so they stopped, hence anyone of us in elementary school in the late 70s didn’t learn metric or the US system of measurements.

So anytime I cook I have google close at hand. Grr… I digress. Anyway that’s a little over 4 pints for $12 on a refill. So that’s $3 a pint of beer. See where I am going here? And its just not the economics. Everyone knows beer on tap is just way better than bottles and cans. And to be able to enjoy draft beer on your couch? Come on!

Growlers are filled straight from the tap of a pub or brewery and sealed with plastic wrap and a cap, and are usually have the name of the brewery on the bottle. 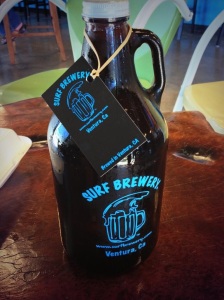 We found out some exciting news from our new friends at Eagle Rock…Up until VERY recently, like seriously this week, used to be in LA county you could NOT bring a growler from one establishment to another to be filled. Just recently and slowly this law is being lifted and as long as your pub/brewery follows protocol (proper sealing and labeling of said beer) you can now take any growler to any bar. But like I said this is very new so maybe give it a few weeks before you try it. And really its fun to collect growlers. If I come to your house and you have a few Im going to think you’re pretty cool.

You know what else is great about Growlers? Beer cooking. If you don’t cook with beer already, you should. Beer is a delicious braising liquid. In fact that makes me want to blog about beer and cooking, note to self, next blog include beer recipes…. okay next one, but for now realize you can go get any of those yummy beers you like to drink and have enough to cook with too!

Oh side note on my trip to Eagle Rock Brewery. The tasting room is really cool. Small place, don’t bring a bus of friends. But super duper friendly guys working there. The guys there were super helpful and I found a new beer I love. Revolution. 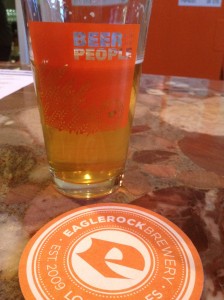 It’s a Extra Pale Ale, which is sometimes hit or miss with me. But it had some great maltiness not overly hoppy and was 5.2% just the percentage I like on a hot summer day. And to be fair to the Belgium beer drinkers of which I am not, I have to give a shout out to another beer Unionist that Mr. Beermann Loved! It’s a Belgium Pale Ale, leaning toward an English Pale ale. Still too Belgium for me, but he said its one of his new favorites!

So for those who don’t have a keg fridge in your kitchen, you don’t have to worry, you CAN have draft beer anytime, you’re just a growler away from a frosty pint !