Heres a little shout out to one of my new favorite CA breweries: Figueroa Mountain Brewing Co. http://www.figmtnbrew.com/ They are located in Buellton California just outside of Santa Barbara. Now you maybe thinking to yourself, Buellton, why is that name sticking out in my head, perhaps you have seen a lil movie called SIDEWAYS? The Hitching Post https://hitchingpost2.com/sideways.html was used for the film. And its now a “must stop” place for any fan of the film. But ah well that’s a movie about wines…and although that area of California is a mecca for great wine its also the home to great beer!

So what’s their story? Straight from the interweb Figueroa Brewing Co is a father/son business: “Jim and Jaime Dietenhofer are a father & son team with a passion for quality beer. Both businessmen and entrepreneurs, they’ve grown their companies on hard work and quality products. Jim raised his family in the Santa Ynez Valley along with wife Judie, and have enjoyed its natural beauty and the character of its inhabitants for years. Starting this business has been a dream of the Dietenhofers for some time, and they feel fortunate to provide patrons the quality that they deserve. Jaime’s wife Meighan and sons Anders and Gray are also key supporters of the operation.”

If you haven’t tried their beers you should. I recently went to a TAP TAKE OVER at Story Tavern http://www.storytavern.com and found SEVEN beers that were amazing. No really I have never had a flight where I wanted more of every beer. 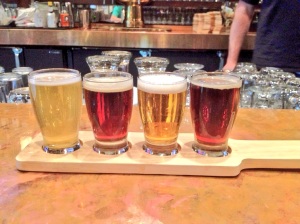 Now heres the thing. Some of these beers are only available in their tasting room. They don’t have them bottled for distribution. Which really only brings two words to mind “ROAD TRIP”! But in the meantime there are some beers that you can get and should try.

First the ones that just tempted Mr. Beerman and I and sent us into a depression that we couldn’t run out and buy more. These included their Big Cone Black Ale 6.8%, Sisquoc Bock 8% (I know the Bierlady doesn’t like the High ABVs but this one was so good, I couldn’t even tell it was high) Oktoberfest/Figtoberfest Lager 5.5% it had me at Oktoberfest but man this was my FAVORITE. It had that wonderful “bread” taste that I mention in a recent blog referring to New Belgiums Blue Paddle. http://www.newbelgium.com/beer/detail.aspx?id=5aec31cf-c34f-4344-8dbe-91a0a5db67ca That same beer taste I loved with Blue Paddle, its like the way a beer used to taste before everyone started getting fancy, just beer, a fine loaf of bread in a bottle, Surfliner Lager 4.4%, and a Munich Style Dunkel at 6%. That was our second favorite. Perfect for the new season! 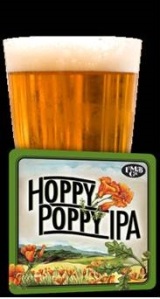 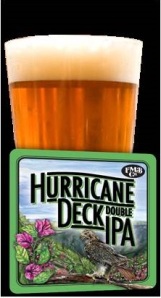 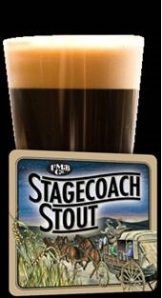 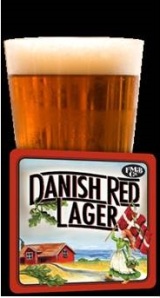 Now the ones you can get. Hoppy Poppy IPA 6.5%. I finally found an IPA that I really really like. And good gawd if that name didn’t cause me to want to go running. Hoppy IPA, redundant much? but no I really liked it.. WHAT? Its true. And their Hurricane Deck Double IPA also great. Even at 8% and an IPA I still found it perfectly drinkable. Davey Brown Ale 6% is a great ale. I find it slightly malty for my taste but its one of Mr. Beermans new “go to” beers. Their Stage Coach Stout 5.6% is a smokey smooth chocolate like stout It’s a good’un. Im on the look out for their Danish Red Ale I loves me a good Red. I’ll report back as soon as I find it.

They have several other bottles that I haven’t tried. And Now I have to. After being exposed to the flight of magic I am a true fan. And how can you not support a Father/Son Brew team? That’s like my dream for Mr. Beerman and one or both of our boys.

So look for these guys. They know what they are doing. I anticipate being able to find all their beers in stores soon.

In the meantime next time you are in the Santa Ynez Valley skip the wine tasting and head to their brewery!

That’s my motto for LA BEER Week. Just Try it! Try a new beer this week. Something you wouldn’t normally drink and maybe you will love it!

So LA Beer Week which is more than a week is up an running with events all over the city. Check out the events http://labeerweek.com/event/. Or if you frequent a favorite bar Im sure something is going on.

Today I spent Day 2 of LA Beer week at two of my FAVORITE places. Story Tavern http://www.storytavern.com in downtown Burbank. And Tony’s Darts Away also in Burbank. http://tonysda.com/ Both places are huge craft brew havens.

So I decided since it was super cloudy and a bit chilly today –by chilly I mean LA standards in September, so like 80– it seemed like Autumn was here.
I have gone into Autumn kicking and screaming. I think part of it is because I have a school aged child now. Gavin is in 2nd grade. So when school is involved the end of summer is that much harsher. For him and for me. School means PTA involvement, stricter bedtimes and of course homework. You wouldn’t think homework in 2nd grade would be that tough. And its not, but as he gets older and the homework goes from coloring to real studies, and I realize just how much I have forgotten, or perhaps never learned. I will be the first to admit I may have spent too much time at Trojan football games and tail gates then in the classroom (college is wasted on the young sigh). So now I find myself answering his questions with a “well lets go look on the computer” or I nod when he says “is this something we need to ask Dad?”.

I digress..so Summer is ending and its mid September which means Im ready for some new types of beers. Not the pilsners and lagers …although truth be told its LA in Sept. It will be 100 again next week and I’ll bust out a good “outside drinking beer”. But today since it was mildly cloudy I went for some darker beer choices.

Our first stop was Story Tavern.

Lucky for us last night they had a Tap Take Over by Eagle Rock Brewery.

http://eaglerockbrewery.com/page/beers I’m sure you know Eagle Rock but if you don’t They are the forefathers of Craft Beer in LA. They have fantastic beers and Mr Beerman and I are big fans. I was giddy to get the Revolution on tap.

Now normally I don’t like an extra pale ale. But this one is so smooth and tasty. I have to recommend it. Even to my friends reading this who don’t normally venture into the Pale Ale or IPA world. From their site: “Extra Pale Ale (XPA) is a variation on American pale ale–bright and refreshing with a substantial hop presence. Light-gold in color, Revolution XPA’s subtle malt backbone and medium body balance it’s hop bitterness. Dry hopping delivers big hop aromas with the essence of nectar fruit, citrus, and freshly cut grass. As these assertive flavors recede a hint of bready malt rounds out the finish.
Bitter never tasted so sweet! ABV 5.2%”
Mr. Beerman is more of a Unionist Fan, a Belgium Pale Ale, which from their site: “A combination of Belgian and English styles, this Belgian Pale Ale has the subtle spice characteristics of cinnamon and nutmeg, produced by the Belgian yeast. The medium body and biscuity malt backbone, common in English ales, support the subtle hop bitterness to make this beer a perfect blend of styles. ABV: 5.4%”

Im still not on the Belgium bandwagon. So I passed, BUT I did find which I think was the greatest find of the day. Their Solidarity which is a good beer to begin with, a black mild ale, “”Mild” refers to an English-style beer that is malt-accented yet light bodied and low in alcohol. 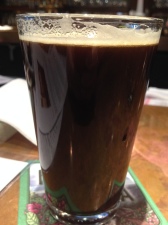 Depite it’s dark appearance Solidarity Black Mild is light bodied and refreshingly drinkable. A variety of roasted malts lend toasty, nutty flavors and complexity, with subtle notes of coffee, dark chocolate, and a hint of smoke”. But heres the thing, Story Tavern had THREE takes on this beer (the others had some different versions as well) they had the normal Solidarity, Solidarity on Nitro (which means creamer like a Guinness or Murphys) and a special Cask version made with Champurrado, mexican chocolate. Okay first let me explain. Cask is how beer drinkers used to drink beer, before the 20th century, far less carbonation it served without Nitro or CO2 and well a bit warmer than usually served. Ok this mexican chocolate addition is the freaking bomb! It was so good. And at 3.8% I could drink it all night. It wouldn’t fill you up and its low ABV makes it such a great beer.

I hear it was a small batch so if you can get some do it. Run don’t walk to Story Tavern this week!

My second stop was to Tonys Darts Away. Its sort of the go to place for Craft Beers. I ended up after several samples deciding on a Mocha Stout from TAPS. It was very tasty. I highly recommend. If you like a good stout and a chocolate coffee flavor this one surely fits the bill.

(see the pic posted). And just in general you should visit here if you want to try a good craft brew! Oh and order the home baked potato chips. You’re welcome.

So my theme of the blog was to try something new. Even if you think you aren’t going to like it try it. I would have NEVER thought I would love a Mexican Chocolate Black Ale, but now I dream of it. You don’t need to order a pint, ask for a taste this week. Surely any server will hook you up. Maybe you will love a beer you never thought you would. It sort of reminds me of my aforementioned 2nd grader. He is horrible at trying new things. So when I want him to try something I said “remember the pumpkin bread”. He turned his nose up to orange bread last fall til he tried a piece. Now he thinks pumpkin bread is the greatest thing since well…sliced pumpkin bread.

Speaking of Pumpkin…I’ll be on a quest this week to find some good Pumpkin Ciders and Ales to report back on. For now Happy Beer Week..and remember “just try it, you may like it!”.